This whole post is the result of a conversation on FB, in the group Educational DM.  It's a pretty neat FB group.  Make use of this post as you will.

Voidstone is a rare metal found only in the depths of the earth.  Voidstone - sometimes referred to as Nullstone - is notable for its strong anti-magic traits and its density.  Anti-magic as in magic ceases to function entirely when near Voidstone.

It has been suggested that a large enough concentration of Voidstone could render a deity powerless.

A few clans of deep dwarves, both Derro and Duergar, know how to work Voidstone ore and alloy it with mithril, adamantine, and cold iron to create Voidsteel.  As magical fires, such as those provided by captive fire elementals or dragon's fire wink out of existence near the Voidstone, these smiths use magma channeled up from the planet's core to first smelt the ore, and then to work it. 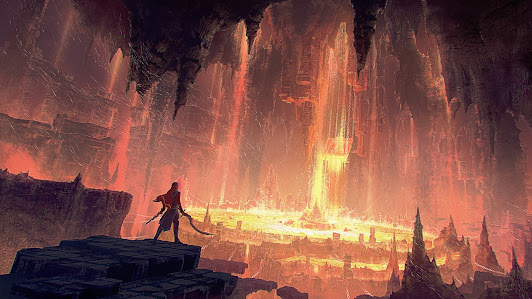 image by silentfield, found at artstation
Typically, Voidsteel is worked into thin bars, two feet long, two inches wide, and half an inch thick.  These bars are then incorporated into doors, bars, and rooms (be it floor, ceiling, or wall), providing enough anti-magic to bar scrying, magical travel, spellcasting in general, and forcing magical creatures out of existence, somewhat like a permanent banishment spell.
Generally speaking, Voidsteel is not used to make armor or weapons due to its weight and brittleness - a sharp blow at the right angle in the right place will shatter the item.  That said, slingstones of Voidstone and arrowheads of Voidsteel make for nasty short-range (the weight reduces range considerably) surprises against magic-using beings.
Like surface-world adventurers, for example.
As might be imagined, these Dwarven clans are unlikely to part with either substance without forcing the purchaser to pay dearly for it.  Gold and typical precious metals simply won't do.  Voidstone and Voidsteel are typically acquired for services, permanent magical items, and surface-world specialties, ranging from drink to rare woods to slaves.
Trafficking in Voidstone and Voidsteel brings its own dangers.
Many beings in the Ironguard world (and most DnD-worlds) rightfully fear this level of anti-magic, so if word gets out that a shipment of it is being transported, said beings will try to stop it - typically via collapsing the cave or flooding it out.  Failing that, nonmagical minions can be used to overwhelm the merchants.
Said merchants are in a bind, as typical methods of transporting lots of heavy goods into the Underdark require magic - magic that Voidstone and Voidsteel negate.  This results in caravans, first of mules, then eventually of Drow pack-lizards and/or porters moving ever-deeper into the darkness.  Given the relative values of Voidsteel versus desired surface goods, these caravans can stretch out for a half-mile or more, especially once guards are involved. 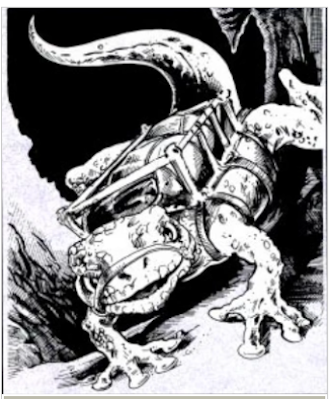 Pack Lizard; from either TSR's Drow of the Underdark or TSR's Menzoberranzan box set.
Exchanging the Voidsteel bars for surface goods requires trust.  Deep Dwarves hoard magic items and will assuredly want proof that said items work - which means moving well out of range of the Voidsteel.  This is an opportunity for ambush and theft - especially if a third party has been following along waiting for their chance.
Presuming the exchange goes well, returning to the surface is not simple, as even a smaller caravan attracts attention, and moving ahead alone or in a small group may prove more dangerous, as the carried Voidsteel cancels out any useful magics the surface-dwelling merchants would typically use for protection.
Despite all this, Voidsteel bars have made it to the surface, becoming the target of raids, wars, and worse when surface dwellers get wind of it.  Once secured, the Voidsteel is most often used to keep dangerous magic items and areas dormant or to protect areas (at least one imperial throne features two such bars in it).  Removing the Voidsteel inevitably causes some form of trouble.
So basically, acquiring (for self or others) one bar of Voidsteel or a solid lump of Voidstone can provide enough adventures for one campaign.
-----
Legends persist of an oversized sarcophagus carved from Voidstone.  Whatever is trapped inside would no doubt be grateful to whomever - or whatever - released it.
-----
Writing this, I suspect these Magic cards may have been the unintentional source of my inspiration. 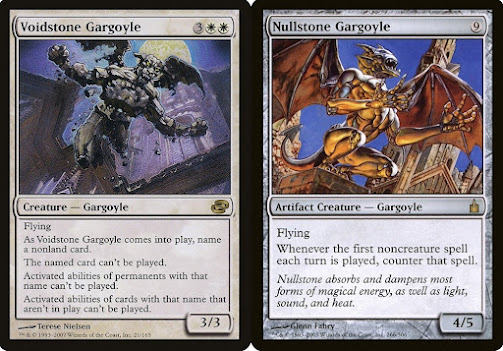 Ben
Continually amazed at how blessed I am.